More than You Know in Palm Springs.

Vista Chino. Farrell Drive. Arenas and Ramon roads. We all know these familiar streets – either by heart or with our navigational devices to get us to our favorite Palm Springs haunts.

But do you ever stop to wonder where the names came from? Turns out these and other Palm Springs street monikers have wonderful backstories that provide a roadmap, if you will, to Palm Springs’ beginnings – which to no surprise – is as unique as the city itself.

The streets of Palm Springs tell it all. Of the successful blend of business savvy Elders of the Agua Caliente Band of Cahuilla Indians (whose ancestral Agua Caliente hot spring gave Palm Springs its name) and movie star entrepreneurs, who together made the city what it is today — the one-and-only Palm Springs!

A Litany of Leadership

As you stroll, bicycle and drive through town, note the street names. And remember the amazing personalities they honor.

Arenas Road – Named for Lee Arenas (1870-1966), whose lawsuit – Arenas vs. United States – resulted in the epic 1944 U.S. Supreme Court ruling that changed Native American policy – and Palm Springs history – by granting tribal members the right to own (and subsequently sell) individual parcels of Tribal land. This ushered in dramatic city growth and allowed the City of Palm Springs in 1961 to buy the Tribal acreage that houses the Palm Springs International Airport leading to the airport’s major expansion and landmark Donald Wexler-designed terminal.

Insider Fact: It’s important to note another influential LaVerne — LaVerne Saubel, who with fellow Cahuilla movers-and-shakers Eileen Miguel, Vyola Ortner, Elizabeth Pete Monk and Flora Patencio crashed the glass ceiling in 1954 as the nation’s first all-women Tribal Council (and probably the nation’s first all-women elected ruling body anywhere).During their leadership Tribal land leases were extended to 99 years. Of their many achievements, the most stellar was the Agua Caliente Spa and Hotel designed by Donald Wexler and opened in 1963 on the site of the Agua Caliente hot spring (Sec-he in the Cahuilla language) in downtown Palm Springs.

Largo Circle – Honors Manuel Largo. Born in 1820, he was instrumental in having more than 30 reservations be set aside for Native American tribes in Southern California.

Vista Chino – Named for Pedro Chino, the highest ranking Shaman in the Cahuilla culture, being both a Net (Ceremonial Leader) and a Pavuul (powerful shaman). Chino was also a cowboy and herded cattle in his namesake Chino Canyon. He was said to be 123 when he died in 1939.

Pablo Drive – Honors Will Pablo, who in 1914 collaborated with ethnographers and documented much of what has become the modern understanding of the Cahuilla culture. Pablo also served as the Department of Indian Affairs Prohibition Officer when the Federal government began its crusade against the sale of alcohol on Tribal lands.

Alejo Road – Named for Alejo Patencio (1852-1930), a Net (Ceremonial Leader) and one of the long line of Patencio Tribal activists.

Belardo Road – Honors Marcus Belardo and his wife, Rosa. Born in 1882, Marcus was an influential Tribal elder and Alejo Patencio’s Paxaa (assistant with special duties). Belardo’s home (near the Agua Caliente hot spring) was a principal gathering place for tribal families from throughout the region.

Amado Road – Named for Amado Miguel (1886-1927), a successful farmer who teamed up with Marcus Belardo in 1918 and together were in charge of growing crops for the U.S. Department of Agriculture.

Andreas Road – Honors John Joseph Andreas (1874-1959), a leading Tribal Elder and gatekeeper at the ancestral Indian Canyons during the 1930s. John Joseph, along with his son, Anthony Joseph Andreas (1911-1953), also an Elder, were early advocates of maintaining control over Tribal territories.

Patencio Road – Honors the principals of the Patencio family, one of the oldest families of the Agua Caliente Tribe. Albert Patencio, considered the last Net (Ceremonial Leader) and Bird Singer, who died in 1951. Also Joseph Patrick Patencio, Tribal Chairman in the late 1960s; his father, John Joseph Patencio, Tribal Chairman, and Francisco Patencio (younger brother of Alejo Patencio), who led the movement against allotting reservation lands to individual Tribal members.

Ramon Road – Honors Ramon Manuel, who was known for wearing a 10-gallon Stetson cowboy hat – and more importantly was the powerful Political Chief of the Agua Caliente Band of Cahuilla Indians, managed the original Tribal bathhouse at the Agua Caliente hot spring and was a staunch Indian rights activist.

When Hollywood arrived in Palm Springs, many of the stars did more than party by the pool.

Gene Autry Trail – Named for Gene Autry, the “singing cowboy” movie and TV star of the ‘40s and ‘50s and Palm Springs entrepreneur. Autry bought his first Palm Springs home in 1940, and a Palm Springs Holiday Inn in 1961, which he turned into the Gene Autry Hotel – now the posh Parker Palm Springs. His mid-century residence on the hotel grounds is an elegant guest suite. Autry also bought a baseball team (the American League Los Angeles Angeles) in 1961, and brought it to Palm Springs for spring training through the 1990s.

Insider Fact: While Autry’s namesake is a major thoroughfare, it’s called “Trail” in honor of his cowboy ways. 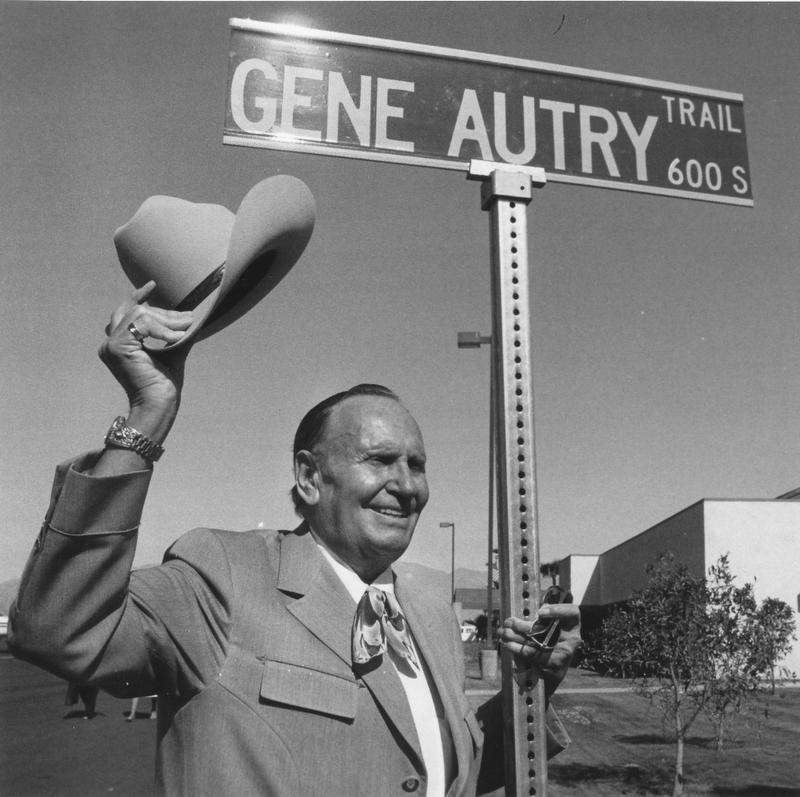 Kirk Douglas Way – Honors movie icon Kirk Douglas (Spartacus! among dozens of others), a Palm Springs booster and resident for more than 40 years (mid-1950s to ‘99). His Donald Wexler-designed home is a Class 1 Historic Site.

Insider Fact: His house backs up to Dinah Shore’s house in the celebrity-packed Las Palmas neighborhood.

Dinah Shore Drive – Named for Dinah Shore, the vivacious 1940s, ‘50s and ‘60s singer, TV personality, long-time Palm Springs resident (1952 to ’94) and avid golfer. She put Palm Springs and the LPGA on the map in 1972, when she founded the Colgate-Dinah Shore Winner’s Circle golf tournament.

Insider Fact: Her Palm Springs house is currently owned by Leonardo DiCaprio; and backs up to Kirk Douglas’ home. 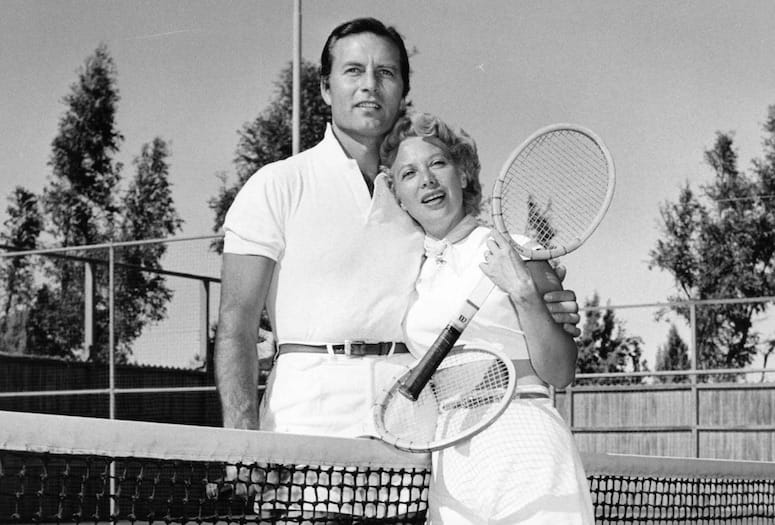 Farrell Drive – Honors Charlie Farrell, a tennis playing 1920s and ‘30s movie star, who with fellow actor Ralph Bellamy founded the glamorous Racquet Club in 1934, Palm Springs private celebrity hangout for some 40 years. He was a dedicated resident and Palm Springs Mayor from 1947 to ’55.

Tachevah Road – Named for Tachevah Canyon and Tachevah Creek.  A bit perplexing, since the canyon is a scenic place and Tachevah means “plain view” in Cahuilla.

Chuckwalla Road – Named for a large lizard –the indigenous desert Chuckwalla. Maybe the cute critters like to sun here?

Mesquite Avenue – Named for the Mesquite Tree, a significant traditional resource for the Cahuilla. 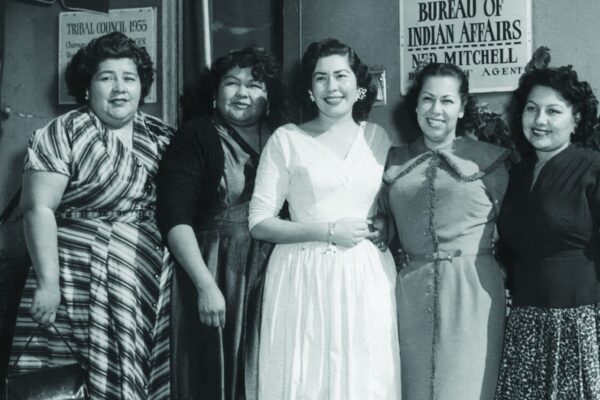 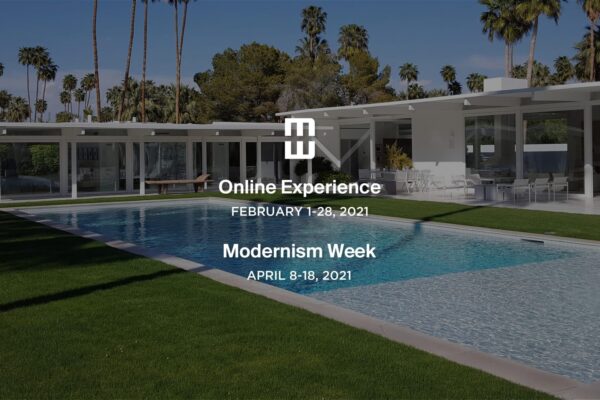 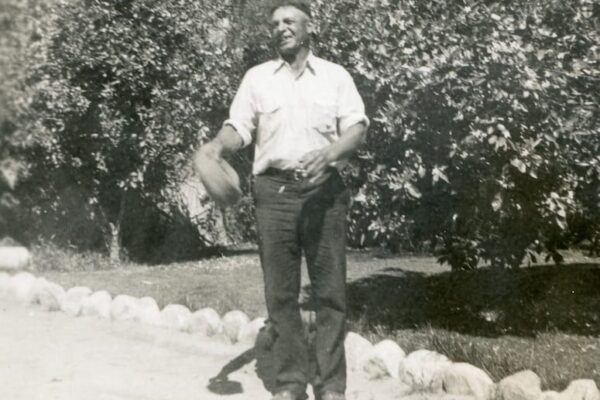