One always feels like something special is going to happen when you approach Melvyn’s, adjacent to the Ingleside Inn. Perhaps, it is the lavish plantings that have grown over the years and provide a great shield from the hustle and bustle from downtown Palm Springs. 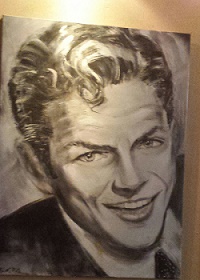 The sense of elegance continues as you are greeted by the maître. On this particular morning, I was there to interview Mel Haber, the founder and owner of Melvyn’s and the Ingleside. I was ushered in to his table, and served a cup of coffee. Soon he bounced in with a smile and said, “You are right on time.”

He knew I was there to interview him about an article that would be published here to celebrate what would have been Sinatra’s 100th birthday in December. Since he had published a book, Palm Springs a’la Carte, I made sure I reread the chapter on Sinatra. Needless to say, I was probing for some new information.

Waiting For The Sinatra Visit

Mr. Haber started with the story about how he opened Melvyn’s and was pretty bummed because Frank Sinatra had not come to his place even after three months after he opened the restaurant. He said, “We all knew that you really hadn’t made it unless Mr. S came to your establishment. Then one night I got word that he was on his way.”

“He arrived and from then on he made this one of his regular places to dine. He always arrived with a party of eight. This group always included Barbara and the people that he viewed as his inside colleagues, one of whom was the man who had given Mr. S food when he was broke and just started out.”  Mr. Haber went on to say, “Mr. S was very loyal to the people who had been there for him through the years and he included them in his inner circle wherever he went.”

Mr. Haber called over the maitre and said, “Brian, what do you remember about Mr. S?”  He said, “Well there is one thing that sticks out in my mind. We have had four Presidents in this establishment. What is interesting none of them carried the aura with them that Mr. S did.”

Mr. Haber elaborated on that. He said, “It is true.” He would come in the restaurant and then stand in front of the bar. I’m not sure why, maybe to make his presence known, but in any case that wouldn’t have been necessary. If Mr. S was here, everyone knew it.”

“Mr. S made it clear that he didn’t want pictures taken of him when he was here in the restaurant. We heard that loud and clear when a staff member asked if his son could have his picture taken with him.  So even though I desperately wanted a picture of myself with him, I knew that was out of the question.” 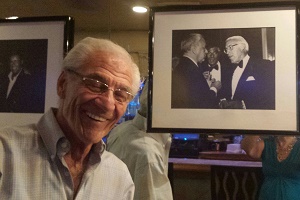 “One night a photographer friend knew I wanted a picture. He told me to position myself near Mr.S and the man he was talking to. He said, “I’m going to get that picture for you.” So this picture was perfectly timed to include Mr. Haber in what looks like a deep conversation with Mr S– that conversation never actually took place. This picture now has a prominent place on Melvyn’s Lounge wall.

The stories about Mr. S generosity are true. He would arrive at the restaurant and ask how many people were involved in serving him very early in the evening. Then at a certain point he asked the maitre to bring in the staff and he would ceremoniously hand each of them a $100 bill.

With Palm Springs, being a much smaller village at the time, Mr. Haber’s connections were extensive. He was informed by a confidante that Mr. S. was going to be coming over and wanted to plan a special dinner party.  A dinner party that Mr. Haber had learned was really the rehearsal dinner party for his wedding to Barbara.

“Mr. S came in and started planning the dinner and asked me if we had black or gray caviar. I knew I was over my head so immediately brought in our chef and we planned the dinner.”   Once the dinner was planned, Mr. Haber, never let on he knew the real reason for the dinner, he said, “Mr. S thank you for planning the dinner here.”  As the interviewer, I caught a very special moment. Mr. Haber eyes watered a bit and he said, “Mr. S gave me the highest compliment.” He said, “Mishpachan” the Hebrew word for you are family.

Even with that being said, Mr. Haber ended our time together with,  “I never got over being nervous around Mr. S.”

15 Restaurants for a Decadent Thanksgiving Meal

Thanksgiving is the perfect time to visit Palm Springs. The weather is beautiful and…