William Cody was retained to alter the Desert Inn in 1945, his first commission in Palm Springs. He completed the Del Marcos Hotel in 1947, his first independent commission, which was recognized by the AIA Southern California Chapter with an honorable mention.

Palm Springs was becoming a fashionable weekend and winter retreat Post-World War II for the rich and famous. William Cody’s career began to flourish along with the city. He decided to move his practice and his family to Palm Springs.  The Thunderbird Dude Ranch hired Cody  in 1950 to change it into the Thunderbird Country Club.  This then led to other commissions, such as altering clubhouses, recreational facilities, and residential developments. This included the Eldorado Country Club (with Ernest J. Kump), Tamarisk Country Club, the Racquet Club, and the Tennis Club.

He began almost a decade of work in 1960 altering and expanding the Palm Springs Spa Hotel (demolished). 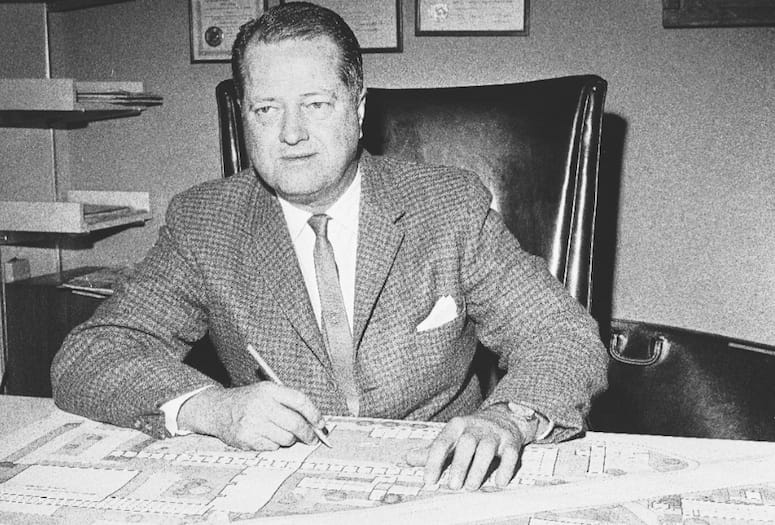 William Cody’s specialization in country club clubhouses with related residential developments led to additional commissions in California, Arizona, Texas, Cuba, and Mexico. His residential projects emphasized key elements of Modernism. This included simplicity of form, natural light, and large windows offering a seamless connection between residential interiors and the outdoors. Because he was not boxed in by any one style, it made his style hard to pin down, and often overlooked in architectural circles.

William Cody was licensed to practice architecture in California and Arizona by 1946. After the Abernathy House, he went on to design the Palm Springs Library in 1972, but suffered a debilitating stroke midway through the project. He died in 1978 at the age of 62.

William Cody’s contemporary home was built on different levels following the contour of the land. If offers walls of glass with structural steel framing and sliding doors from two of the bedroom and living room opening to a screened and shaded inner garden court. In the center of the tile-floored living room there is a fireplace brazier and tables and foam cushions to form a conversation grouping in a sunken area known as “The Pit.” Other unique features are a bomb shelter, retracting ceiling over the Cody’s bed, a toy closet and pivot doors. This is located in the Sunrise Park neighborhood.

In 1947 William Cody received his first independent commission for completing the Del Marcos Hotel, which opened in 1948. Owner of the modern styled resort was S. W. Marcos, winter resident and a real Villager. 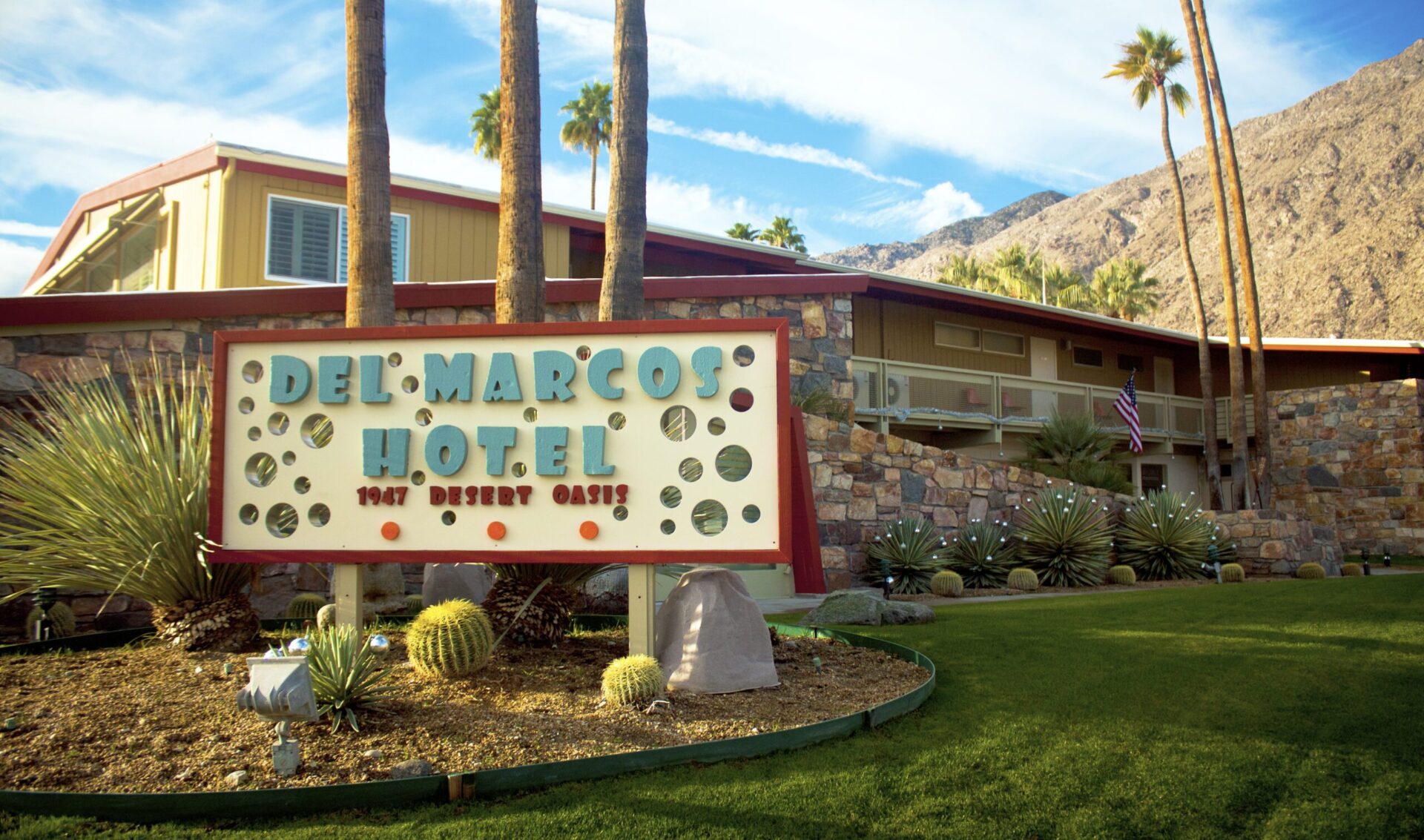 Developer Jack Meiselman approached architect William Cody around 1950 to design a series of three-bedroom/two-bathroom houses for him for a cluster of parcels within the Desert Palms Estates tract. Surviving drawings indicate what appear to have been two plans and three elevations for each plan, for a total of six designs. They appear to be bordered by Park Drive to the north, McManus Drive to the south, Sunset Way to the east, and other tract parcels to the west.  These homes are now part of the Sunrise Park neighborhood, which is where William Cody lived.

L’Horizon was built in 1952 as the a private family retreat for the television producer, oil tycoon, and legendary hotel owner Jack Wrather and his wife, Hollywood actress Bonita “Bunny” Granville. He is best know for producing the Lone Ranger and Lassie. She was in Now, Voyager with Bette Davis. Wrather commissioned architect William F. Cody – known for his desert modern work – to design his retreat with a cluster of guest houses as a hideaways for his Hollywood friends.

Wrather’s property was a playground for Hollywood’s elite throughout the 1950s and 1960s. This included Marilyn Monroe and Betty Grable, as well as other VIPs, such as the Nixons and Reagans. Over the past few decades, the property fell into disrepair and lost its glamour. That is, until Los Angeles-based “designer to the stars” Steve Hermann learned that the property was for sale and snapped it up. L’Horizon was reopened in July 2015 after a multi-million dollar renovation. 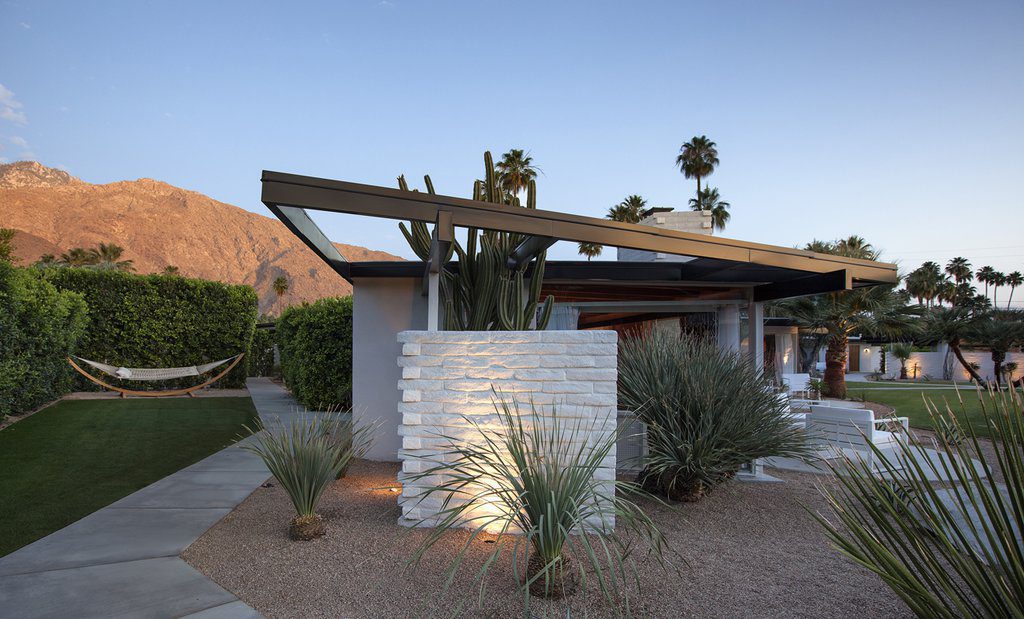 Cody continued to explore simple forms with flat or gently sloping shed roofs that reduced the dimensions of column and roof structures to a minimum, creating light profiles.

This was designed by William Cody and built by developer Paul Trousdale. Today it consists of 37 units (54 “historical” units) in 18 buildings and two structures. Located at the western end of the complex, the pool is surrounded by a large open area of landscaping. This serves as a buffer between the pool and the western-most units. A fence enclosing the pool was added (at an unknown date) presumably due to safety requirements. Although detached, the westernmost buildings of the complex are arranged in a half-circles creating an enclosure for the common center courtyard. The units and site of the RCCW complex have only seen some minor alterations. As a result, the essential characteristics of form, plan, space, structure, and style have survived intact. 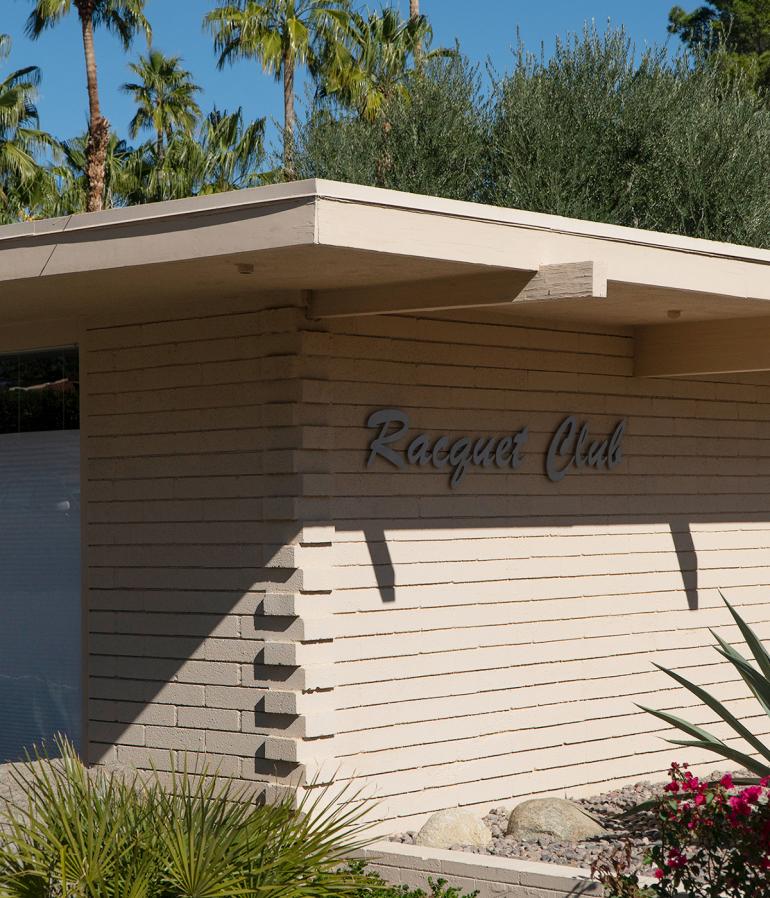 William Cody designed the house in 1962 for James Logan Abernathy. He was a wealthy socialite in Palm Springs and the son of a pioneering furniture manufacturer in Kansas City. The residence is formed by two L-shaped sections, which are linked at their joints by a central square unit. But it is more notable for its ample outdoor areas.  Most of the outdoors are encompassed by an overhanging roof that spans nearly 10,000 square feet (929 square metres) – doubling the home’s livable footprint.

The station opened under the name “Tramway Shell Service Station.” It was lauded in the Desert Sun for its modern design and amenities. Alterations to the property include the 1984 addition of mini-mart/convenience store to the west façade of the service garage, fronting N. Palm Canyon Drive. Other alterations to the property include the replacement of the gasoline fueling pumps and concrete islands in 1991.  Additionally, the boarding up of original troffer lighting recessed within the canopy and the addition of new fluorescent lights to the underside of the canopy. Finally, an the addition of a metal storage enclosure to the east façade.

You can still fill up here! 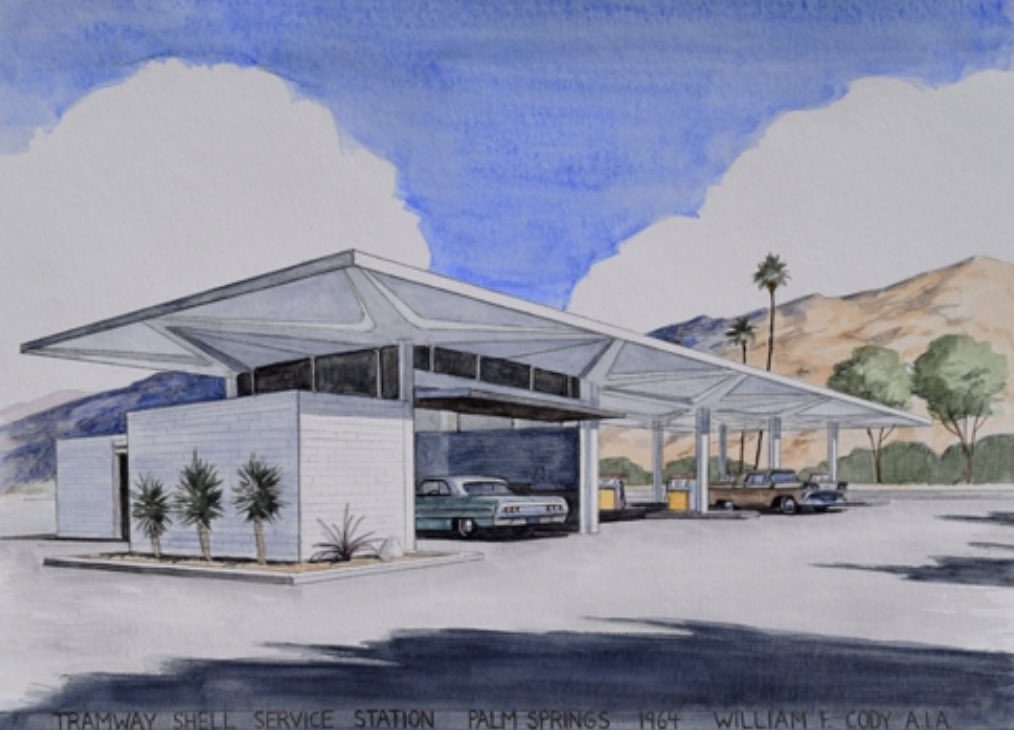 The 10-foot marble altars were carved in Italy to Cody’s precise specifications.  The sculptured ceilings drape like tented fabric, and the clerestory windows welcome wide rays of strategic natural light. The main entrance at St. Theresa is at the base of a cross shape. Outside you will be greeted by red and yellow stained glass in a pattern that was designed by William Cody himself.  It shimmers in morning sunlight. However, as you move through the heavy wooden doors, the space darkens dramatically. The floor is slate, the ceiling is that same dark wood, and light sneaks in through clerestory windows. 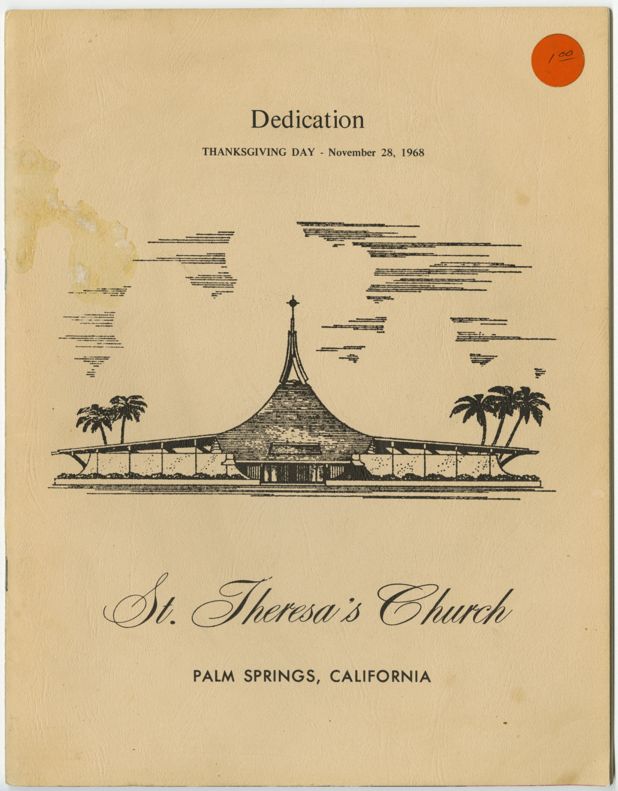 The Palm Springs Glass House designed in 1967 is an exceptional example of William Cody work.  It showcases his magic by combining international style minimalism with the indoor/outdoor way of living so emblematic of Palm Springs at the mid-century. Called the “master of thin” by other architects, Cody’s incredibly thin roof floats above a glass house that is almost perfectly symmetrical. A 40 x 25 foot central pavilion is flanked by a master wing at one end and kitchen/guest quarters at the other end. The front yard, shielded from the street by walls of slump stone (a signature Cody detail), imparts a distinctive oriental feeling like that of a zen temple rock garden. Additionally, the protective walls at the street insure  privacy to the occupants of the glass temple within. This arrangement allows owner and guest to absorb both garden, mountain and the city views. 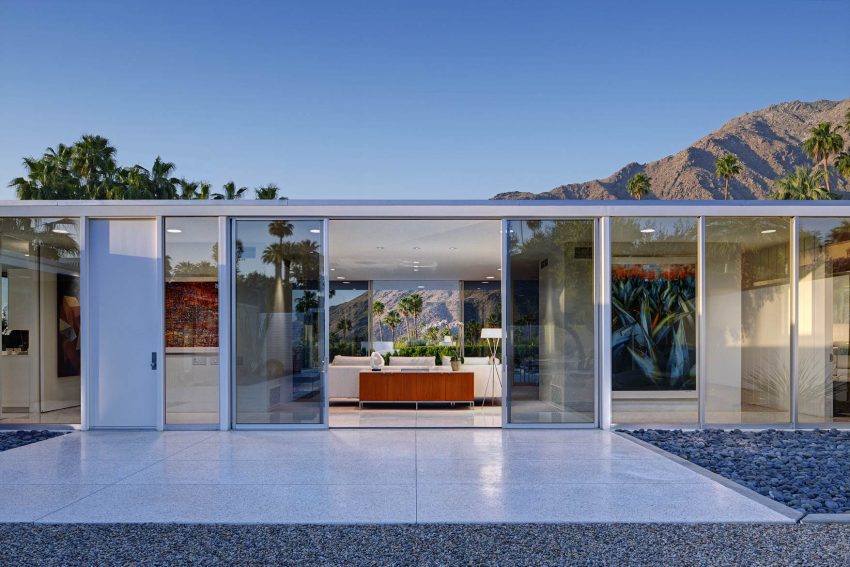 Carl Lykken donated $10,000 in 1971 to be used for the construction of a new city library. He was one of Palm Springs pioneers and a 29-year member of the Palm Springs Library Board.  The city passed proposition “R” for seven new recreational facilities, including a new library. Of the money raised, $104,733 went to William Cody for the library design. The building was expected to cost $1 million. It was to be built on what was then the Polo Grounds, but is now by the baseball field. Groundbreaking was on June, 1974. Contractor Peter Kiewit built the new main library at a cost of $1,418,000.

A central and spectacular focus in the new building was the indoor fountain set in a skylighted atrium.  The decorative fountain tiles and tile work were donated by the Friends Of The Library. 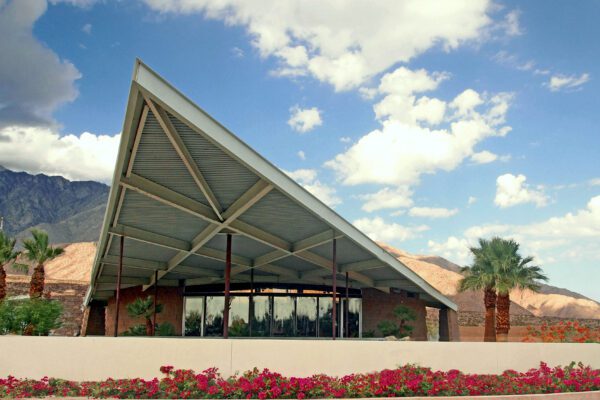 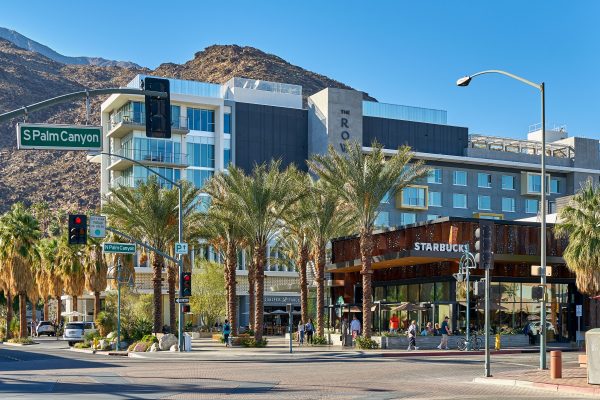