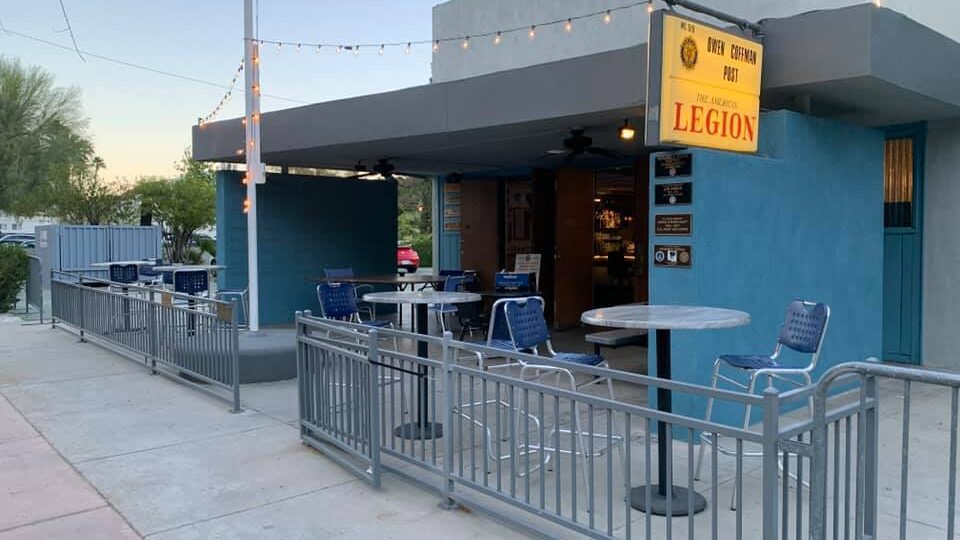 Bridging the Past with the Future at American Legion Post 519

Remembrance is an act of love. When Lee Wilson, Jr. discusses history, especially about the American Legion Post,  he performs a jitterbug through time, bouncing effortlessly through decades without losing sight or soul of the people he memorializes. It feels as though he knows each subject, praising their accomplishments like they’re in the room with him.

“Owen Coffman, he was a Stanford graduate, this guy was Palm Springs royalty as part of one of the founding families of Palm Springs.”

Wilson is referring to the grandson of Nellie Coffman, the founder of the Desert Inn who is also considered a matriarch of our hometown. The Desert Inn was the second resort in Palm Springs and put Palm Springs on the map. They named American Legion Post No. 519 for Owen after his death in WWII, but the organization’s history stretches further back than that.

“The original American Legion was founded in 1918 by World War I veterans in Paris,” notes Wilson. “And then posts immediately started springing up around the country. By the way, the early Legions and VFWs were the only place during Prohibition where you could probably go buy a beer.”

The king of jocular asides, Wilson continues, “Excuse my language, nobody wanted to screw with the veterans… So during Prohibition, Legions and VFWs were the only place where veterans could go get a beer or a cocktail or something. It was kind of an open secret.”

It’s no secret the military commemorates its heroes openly and passionately. Honor is infused in the very foundation of American Post 519. Wilson narrates, “Construction started in the summer of ’47 and it was built by Ryland Pinkard. His son was killed in World War II at Saipan, and he wanted to build the Legion in honor of his son.”

Prestige has shimmered from every corner of the hall since its inception. “American Legion 519 is a Class 1 historical building in Palm Springs. We were designed by the architects John Porter Clark and Albert Frey.” 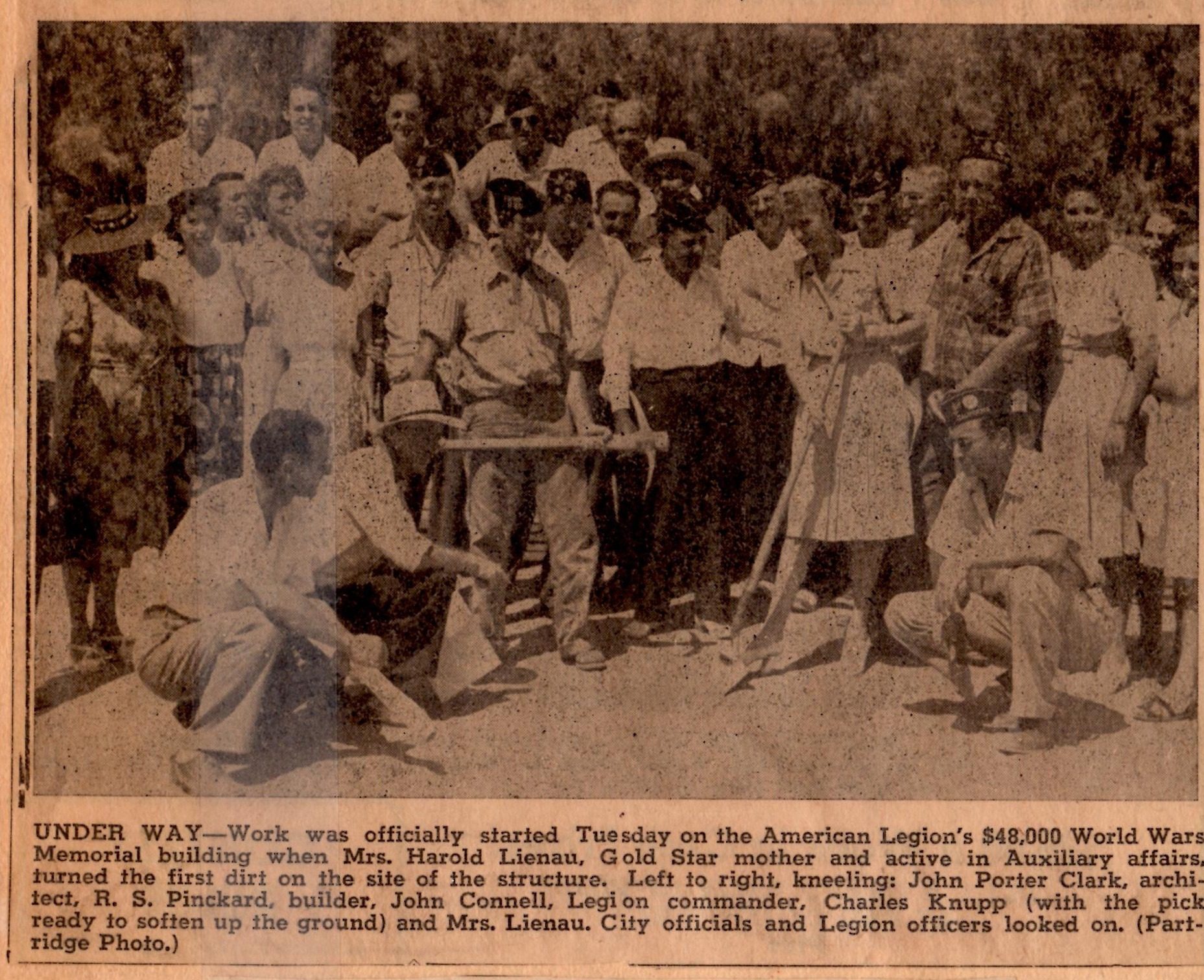 Wilson relishes his opportunity to speak for the structure. “As the historian since 2012, I’ve learned so much about that place, not just the architecture. We’re one of the very few examples left in Southern California that has what’s called a lamella ceiling… it’s a wood-frame sort of Quonset structure that is self-supporting, so it doesn’t require any poles to hold up the ceiling.” 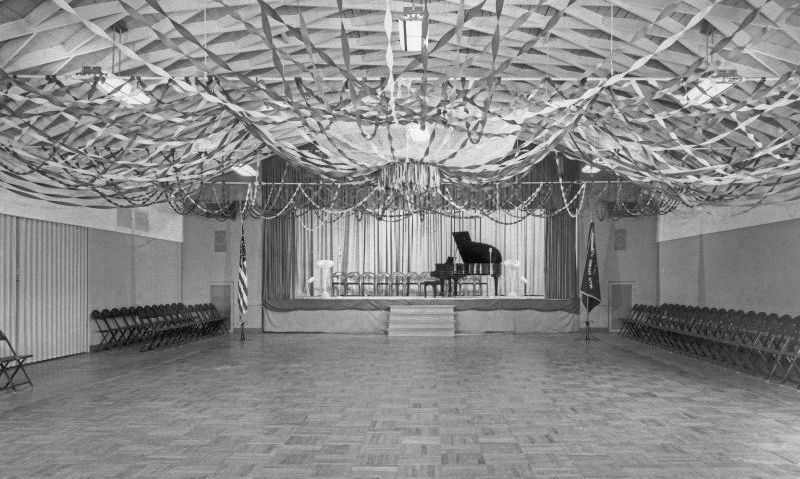 But that ceiling was obscured by panels and air-condition equipment when the Riverside County Court rented the space. It was used for municipal storage, but its potential could not be denied.

“Once we’re going to be refurbished,” predicts Wilson, “we will be the coolest place in Riverside County, easily. Our Hollywood history, for example, goes back to 1948 with the very first radio broadcast coast-to-coast from ’48 to ’54.”

That’s a segue fit for the airwaves. Take it away, Tom McLean…

“All of live radio happened on stage,” explains McLean, Vice President of amateur radio club K6TAL. “When I say ‘live radio,’ people go dumb. There was no TV back then. None whatsoever.”

Big bands were big business, and only the grandest facilities in the nation could handle the rigors of broadcasting. “There were two recording studios: one in Los Angeles, one in New York. But all the celebrities were out here. I mean everybody. The Rat Pack, Doris Day, David Niven. I mean, the list goes on and on… They decided, ‘Let’s build this,’ and the only building that could accommodate it at the time was the Legion Hall. So ABC and CBS built this back in the 40s… It was sent through phone lines to Burbank and Los Angeles up on a 50,000-watt transmitter.”

Palm Springs was officially on the entertainment map, drawing celebrities to the spotlight. McLean lists them off like he’s hosting an epic dinner party. “Bob Hope, Bing Crosby, Jack Benny, Cary Grant, Groucho Marx, Al Jolson, Eddie Cantor. These are just a few of who was here.”

And they pressed their luminous lips to some of the “buried treasures” that McLean and Lee Wilson found when they reopened the American Legion 519 stage after decades of shuttering. One such find: a 1948 microphone used by Judy Garland herself.

Listen to a snippet of a Kraft Music Hall broad cast from the American Legion Post No. 519 starring Al Jolson.

“That’s the original microphone. We have provenance on that. We’ve been offered a chunk of change for that,” McLean beams proudly. “We took that microphone apart and scraped off a quarter inch of nicotine from the inside. Because back in the day, in the 40s and 50s, one of the sponsors was Lucky Strike.”

As the smoke cleared, McLean also found military memorabilia lurking in the mounds of forgotten artifacts. 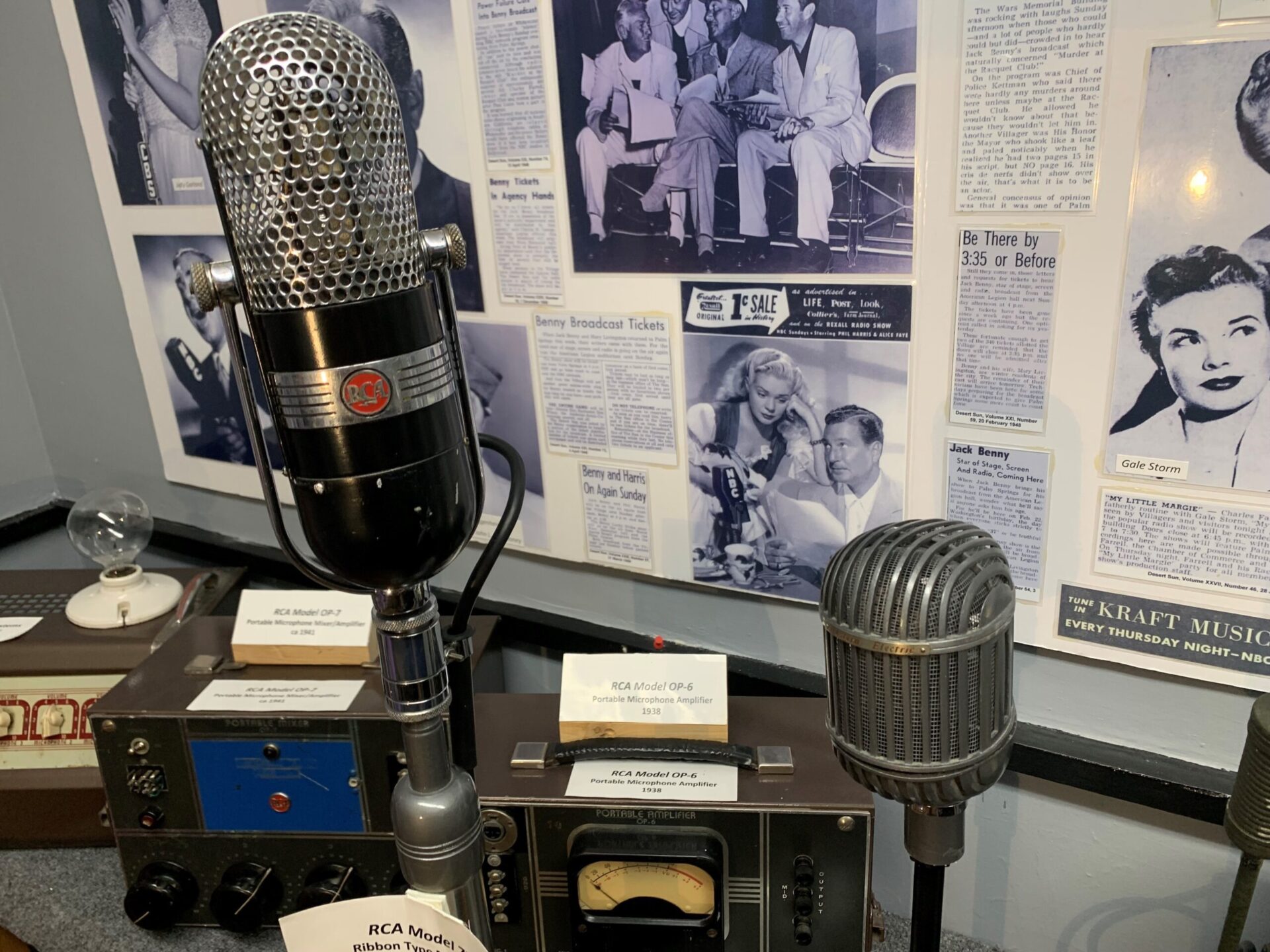 “I think you’ve heard of the Navajo Code Talkers? We had one of our members donate that radio to us. It’s one of the originals. Try and pick that up.” McLean brings history to life by allowing us to (carefully) hoist the cumbersome WWII battlefield radio contraption off its mantle. “They had to carry that around on their back and that did not include the batteries.”

Inspired by heroism of the past, the American Legion’s radio station still serves as an emergency communication center, and it echoes with decades of esteem.

“The history is phenomenal,” concludes McLean with an understated breath of awe.

Music is the Key of Life

Just outside the radio booth, another priceless wonder dominates the American Legion 519 stage. “We’ve got a 1905 Salon Grand Steinway that, again, Al Jolson, Jack Benny, all those guys played on our piano.” Wilson continues, “It needs to be restored and that’s going to be part of our restoration process.”

Wilson showers praise on a fellow Legion member who has dedicated her free time to polishing and preserving the Steinway piano. “Her name is Claudette Bradley, and she’s cute as a button and she was a Marine Corps classically trained pianist. She played for President Carter, even, at the White House.” 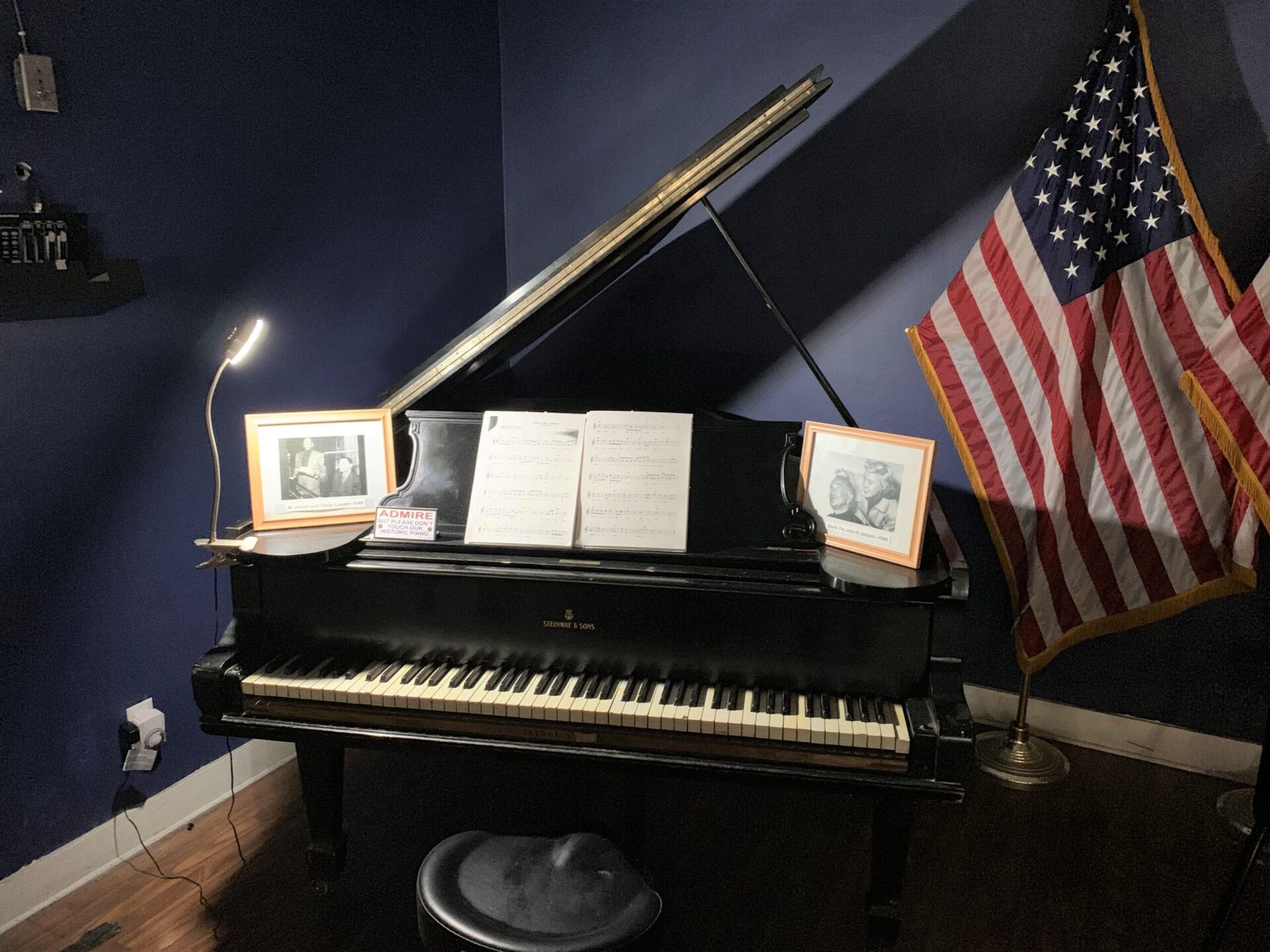 American Legion 519 is a source of revelry – then, now and in the very near future. “We’re the only place Downtown Palm Springs that can hold up to 250 people to see bands and stuff like that,” invites Wilson. “We should be hosting national bands because we’re just perfect location. We’ve got all these cool hotels that are popping up around downtown. A lot of young people are coming to Palm Springs now. And so I’m trying to get us involved.”

American Legion 519 Is Not Just For Veterans

“Even though the American Legion Hall is technically open for veterans and their friends and family, we do have events open to the public.” Wilson also describes how veterans at American Legion 519 are incredibly willing to sign in guests for a night of entertainment and inclusion.

“We started holding events just on Saturday nights during the COVID crisis outside when they loosened regulations. We had DJs and bands. It was so cool. You wouldn’t believe it. And we’re just down the street from Marilyn Monroe statue now. So we’re a perfect location.  For these Saturday night events for younger people we had disco dancing with disco lights. It was really, really fun outside. We have the greatest stage, most historic next to the Plaza Theatre in Palm Springs.” 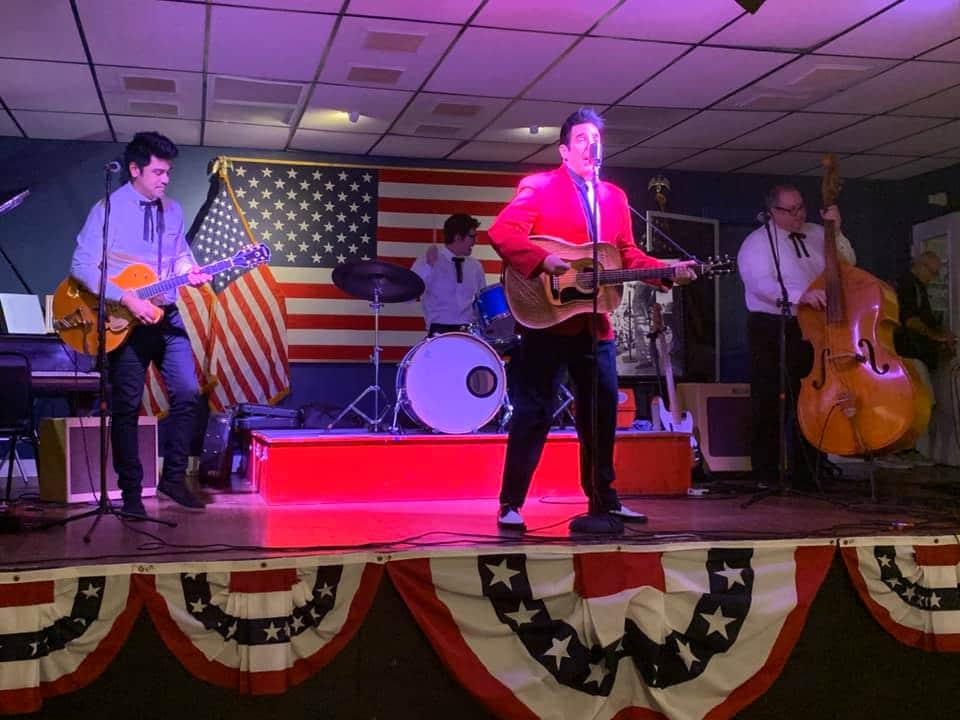 Amidst the joviality of concerts and community outreach, Wilson never wavers from his core mission.

“We’re sitting on a gold mine between our architectural history and our Hollywood history because we want to do more things for younger vets… We can just let veterans know that we’re there for them. We’re going to have entertainment for them. ”

In addition to social events, American Legion 519 is a bastion of other valuable resources. “We have what’s called a veteran service officer. If you’re a veteran and you need help with your claims with the VA, we have you covered.

“I also founded the Palm Springs Fallen Heroes Project. It honors our local 27 service men killed in action from World War II, Korea, Vietnam, Iraq, and Afghanistan. I started that project. We have a display at the Air Museum.”

But commemoration is more than just a duty to Lee Wilson, Jr. – it is an honor.

Tragedy flickers through Wilson’s voice as he eulogizes his fallen pupils. Clearly, he regards the Legion as their forever home, which is why he strives so hard to keep improving and evolving the space.

Change is never easy, but it is usually necessary. As Wilson perseveres to perk up the American Legion 519, one of his biggest obstacles is perception.

“We’re trying to change our image. To attract younger veterans. To be more eclectic.” With a self-effacing chuckle, Wilson soldiers on.

“You can imagine, if we restore this place with modern TVs, modern sound system, modern internet, wow, just think of it! Everybody in Southern California would want to hang out… I’m trying to get us involved,” concludes Wilson emphatically. “Find sponsors, find bands and, wow, this could be the little acorn that grows into something big.”

With the help of visionaries like Lee Wilson and Tom McLean, American Legion Post 519 flourishes from the aforementioned acorn into a tree of life and legacy. We salute its continued growth. 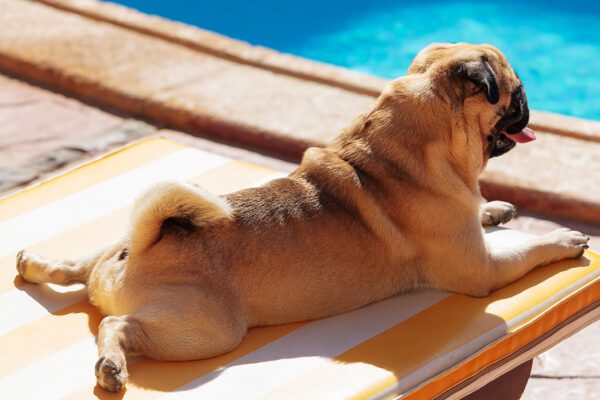 Get a Dog’s Eye View of Palm Springs

A Ruff Life Hello, human! Where are we going today? May I humbly suggest the… 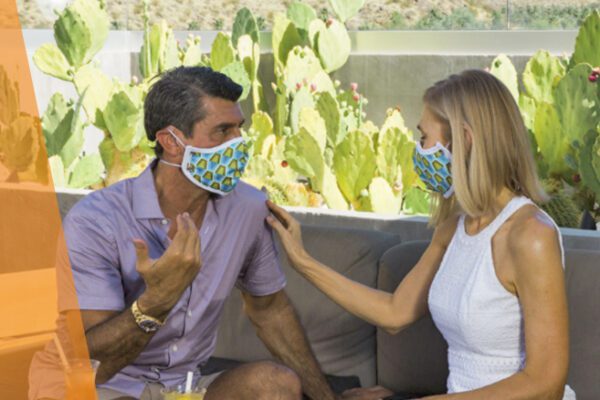 Drag Me to Palm Springs

These Queens Will Entertain You Throughout the Week By Kevin Perry Weekends are for amateurs….