Joshua John Miller, Grandson of Bruno Bernard and Chairman of the Bernard of Hollywood brand, spoke at the Forever Marilyn unveiling in downtown Palm Springs on June 20, 2021.  This is his story how his famous grandfather, Bruno Bernard, helped launch the career of Marilyn Monroe.

[Bruno Bernard (February 2, 1912 – June 3, 1987) also known as Bernard of Hollywood, was an American photographer best known for glamour photography of Marilyn Monroe and others.]

“The woman we know as Marilyn Monroe, was born right here, in the City of Palm Springs.

It Began with Photographer Bruno Bernard

My grandfather, Bruno Bernard, known as Bernard of Hollywood, met Marilyn in Los Angeles one day as he was leaving a dental appointment. They struck up a conversation and became fast friends. Both of them were strangers in a strange land, Hollywood in the 1940’s. My grandfather was a refugee from Berlin during the Nazi occupation and Marilyn, Norma Jean, was an orphan who bounced around foster homes her whole childhood.  They immediately forged a friendship for the rest of their lives.

Where my grandfather was already on the rise as one of the top glamor photographers in the business, with photo studios on Sunset Boulevard, and even here on Palm Canyon, Marilyn was still struggling for a break, having only scored bit parts thanks to a contract with Fox that was running out and not being renewed. Marilyn wondered to my grandfather one afternoon whether she should just throw in the towel. But my grandfather convinced her, he said “Let’s go to Palm Springs.” There was a place called the Palm Springs Racquet Club.

If you don’t know what it was, it was sort of the Studio 54 of the 1940’s and 50’s. He was the only photographer allowed on the grounds of the Racquet Club at the time and he took a picture of every golden age star that would stay there. He also kept all their secrets so they trusted him with their pictures. When he brought Marilyn into the Palm Springs Racquet Club, she felt as if this moment was going to change the rest of her life.

It was New Year’s Eve, 1948, and he brought her to a New Year’s Eve bash. He introduce her to a gentleman by the name of Johnny Hyde, who happened to be the President of the William Morris Agency (represented some of the biggest names in Hollywood). Well, he fell in love with Marilyn and Marilyn fell in love with him and he basically constructed with Marilyn…  But what people have to understand is that Marilyn wasn’t built by the studio. She built the studio. He created her image. She created the dream that other people, white, black, green, orange, any gender, that you could be anything that anyone wants to be if you go after it. That’s what Marilyn represented and that’s what my mother, Susan Bernard, who carried my grandfather’s legacy, always taught me.

As a person that’s part of the LGBTQ community, I’ve always felt inspired by Marilyn’s moxy and determination to make a stand in the world as an artist and as a woman.

Marilyn was a woman who, when Ella Fitzgerald was performing at a nightclub, no one would come see her in the early days. Marilyn said if I go to the nightclub every night, will the press come and cover this amazing African American singer? She helped put Ella on the map!

Over the years when Marilyn rocketed to fame, she and my grandfather stayed good friends. The relationship leading to the iconic picture inspired the statue before us today. The Seven Year Itch, a movie Marilyn was shooting, was doing reshoots on the Fox lot. But unfortunately, there were two reasons it had to be reshot. Her husband, Joe DiMaggio, was not happy she was letting her skirt fly in the wind. But Marilyn, being Marilyn, does what Marilyn wanted to do. So she did 50 takes.

Later they reconstructed the whole set for the Seven Year Itch on the Twenty Century Fox lot. My grandfather was invited to join her had was the only photographer allowed on the set. This time the effect worked. When the breeze made Marilyn’s skirt go flying, he laughed and my grandfather snapped the picture that would cement her as not only a star, but as a legend.

That night, she would tell my grandfather, she would never forget, she had become Marilyn partly because of his support and his belief in her, and Palm Springs.

Her words to my grandfather were, “It all started with you.”

So, in many ways, Marilyn started here in Palm Springs. So it’s fitting that she’s back again.”

Want a meeting destination that offers your group cultural experiences unlike any other? Look no… 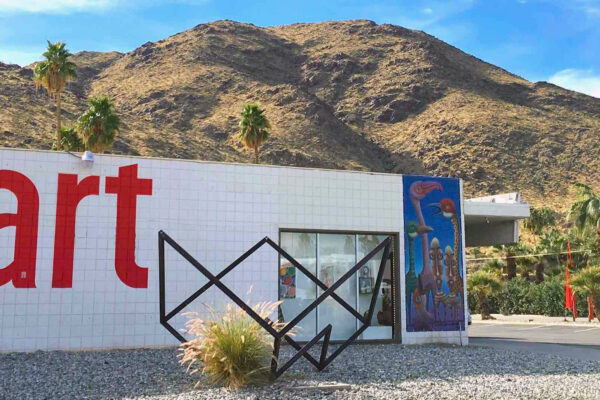 Palm Springs is an art lover’s dream destination any time of the year. Not only…