The park lies in the ancestral homeland of the Agua Caliente band of the Cahuilla people who seasonally migrated between the shady palm groves and meltwater creeks of mountain canyons in summer and the hot springs and temperate climate of the valley floor in winter. 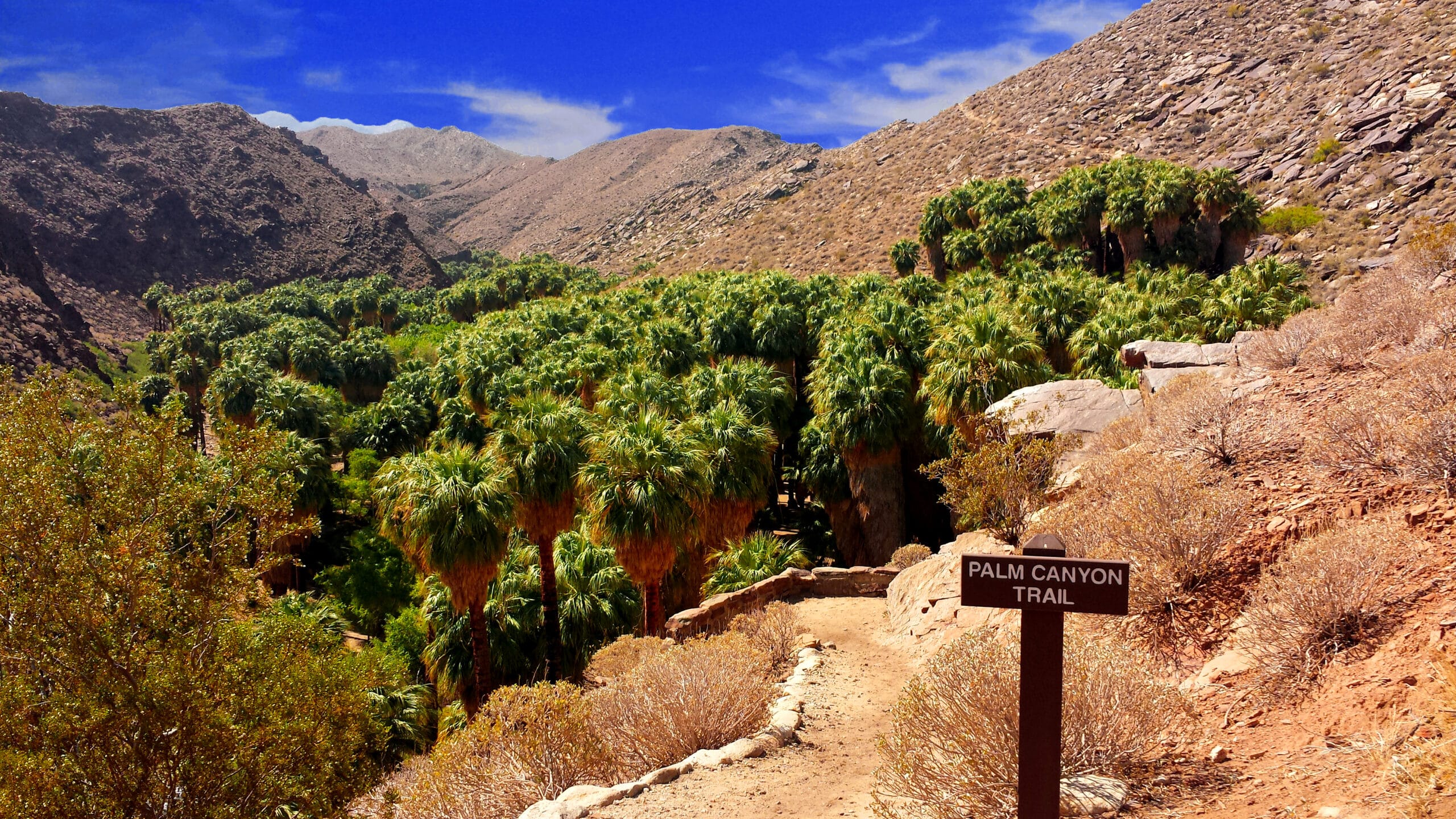 The park is also located on the historic site of Nellie Coffman’s Desert Inn. An early booster of Palm Springs, Coffman stressed the space, stillness, solitude, and simplicity of Palm Springs. Nellie’s “four S’s” would inspire the park’s design, which amplifies the intrinsic qualities of this extraordinary place to immerse visitors in the multisensory beauty of the desert and celebrate Palm Springs’ legacy as a destination for health, nature, and pleasure seekers.

The park is made up of three spaces: the Palm Grove, the Outcrop, and the Theater. Each offers distinct programmatic capacities and reveals facets of the region’s dynamic geology, distinctive vegetation, and rich history.

The densely planted Palm Grove satisfies the need to achieve thermal comfort in the extreme heat of summer days. The tight arrangement of over 130 Washingtonia Filifera, California’s only native palm, was inspired by team hikes to Palm Canyon on the Agua Caliente Reservation. The canyon’s sandy floor and continuous canopy formed a cooling cathedral that significantly influences the Downtown Park’s identity.

The design team measured air temperatures inside and outside Palm Canyon and mapped the spacing of its palms, most of which retained their frond skirts except where a fire had burned them off and charred their trunks. Some had even been struck by lightning creating a sinuous trunk form known as a “snake palm”. For the park, palms of varying heights were selected for their unique and irregular forms and composed to create shady social eddies of varying sizes.

3D modeling of seasonal shade scenarios was used to ensure coverage throughout the year. Custom aluminum park furnishings stay cool to the touch and are left loose for users to “follow the shade” throughout the day. Visitors can move them around.

After dark, the grove is illuminated to glow like a lantern inviting park use into the cooler evening hours.

Team hikes in Tahquitz Canyon offered an up-close experience of the colorful banded rock formations which offer such striking views from the valley floor. The team abstracted this geology into a custom “sedimentary” finish for shotcrete vertical walls and pre-cast concrete modular seat blocks that retain slopes and form gathering spaces in the park. The uplifted geologic layers of the Outcrop reflect the amber tones that make up the San Jacintos, reddish and rumpled sandstones along the base to desaturated and smooth granite along the top.

Meandering trails rise with a landform at the east as the Outcrop becomes the backdrop for the park’s dramatic centerpiece, a powerful cascade inspired by Tahquitz Canyon’s iconic waterfalls. In front of the waterfall is an interactive water feature of jets and fog emitters that cools the heart of the park while bringing the magic of surrounding mountains into the urban core. The Outcrop’s westernmost extent contains park restrooms and a police substation fully integrated into the geologic structure.

Park visitors flock to the shade of the Palm Grove and the relief of the Outcrop’s water features to beat the heat during the day, but at night as temperatures come down, the Theater comes to life. This space honors the cultural heritage of Palm Springs. The Theater hosts an array of events from live performances, lectures, film nights, and music festivals taking place on an elevated stage with a capacity of over 1,000 on the event lawn and amphitheater seat blocks stepping up into the Outcrop. The stage is framed by a palm frond-inspired shade canopy and has a dramatic backdrop of the Palm Springs Art Museum and the San Jacinto Mountains.

The materials and the plantings in the park are rooted in the character and natural history of Palm Springs. Local ‘Palm Springs Gold’ stone was sourced from a quarry 10 miles away and used as boulders, cobble mulch, concrete topcast, and decomposed granite to complement the hues and tones of the surrounding mountains.

Climate-appropriate native and regional desert plantings were specified to provide ecological habitat, attract native pollinators such as monarch butterflies and hummingbirds, and showcase the biodiversity of the desert. Mesquite and Palo verde trees provide shade and anchor a more arid and sculptural palette of ocotillo, agave, and barrel cactus on the Outcrop. Hesperaloe, bulbine, and desert milkweed are among the more colorful species in the Palm Grove planting areas, which also contain a series of rain gardens receiving and filtering all stormwater from the park.

Armrests on the seat blocks increase accessibility while offering pops of vibrant color sampled from the blooms of surrounding flora.

It’s a great time of year to spend the holidays in Palm Springs. The warmth…