A Conversation with J.R. Roberts and the Restoration of the Palm Springs Plaza Theatre

He speaks from experience. J.R. fell in love with Palm Springs’ sunny, stylish lifestyle more than 20 years ago and quickly bought a vacation home. “I’ve always had a passion for architecture. One of my favorite things to do is buy, restore and live in vintage houses.” One vintage house led to another and in 2000 J.R. purchased and restored the iconic 1954 Edris House, designed by architect E. Stewart Williams.

With arguably more mid-century buildings than anywhere else, and many in need of restoration, it was only a matter of time before J.R. left his architectural firm in Santa Monica and moved to Palm Springs permanently. 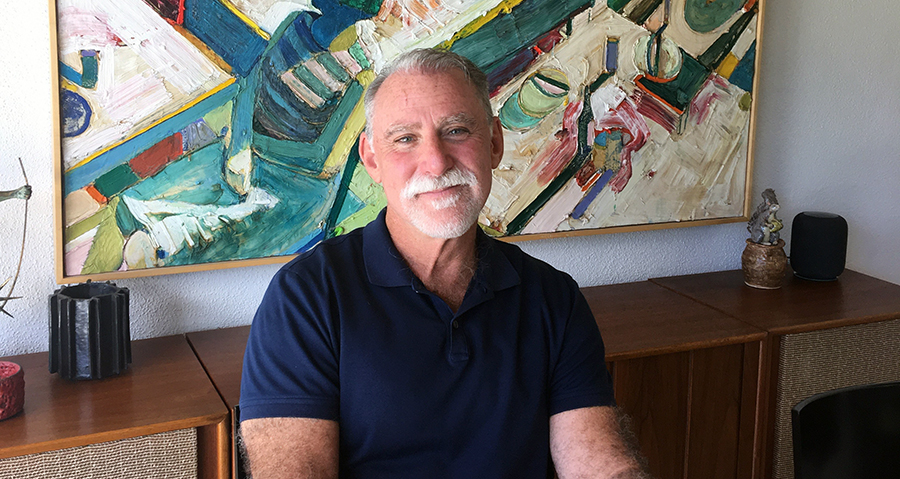 His latest stunner is the 1951 Lawrence Welk House. Taking me on a tour, I found his skill at returning the home to its modernist perfection remarkable. “Welk lived here from 1961 to 1971, at the height of his popularity. The Lennon Sisters often stopped in,” he said.

But Grace Kelly? In what J.R. whimsically calls the “Grace Kelly Bathroom,” I was impressed by a series of framed personal letters written by Kelly and mailed from various destinations where she was filming (before she married Prince Rainier). “The letters are to my grandmother. She and Grace Kelly were close friends because my grandmother was the head of the Ladies Wardrobe Department at MGM Studios,” he explained. “Wow!” This was during the star-studded heydays of the studio system – and Palm Springs celebrity glory.

No wonder J.R. fell in love with Palm Springs – mid-century architecture and a family connection to the mid-century stars. A match made in preservation heaven. 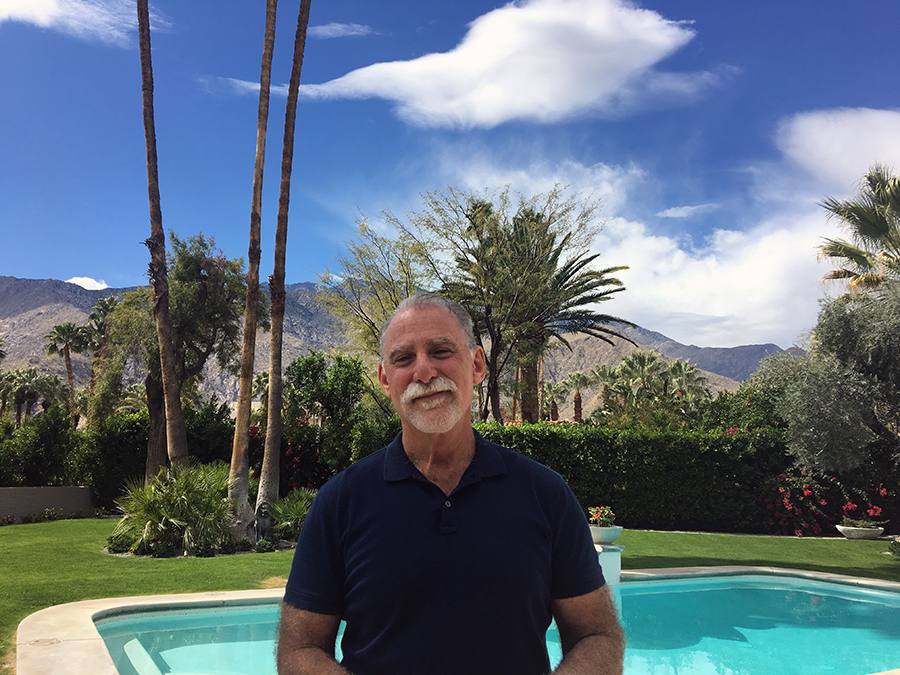 With such a stellar background, J.R. was the perfect choice to co-chair the new Palm Springs Plaza Theatre Restoration Steering Committee. 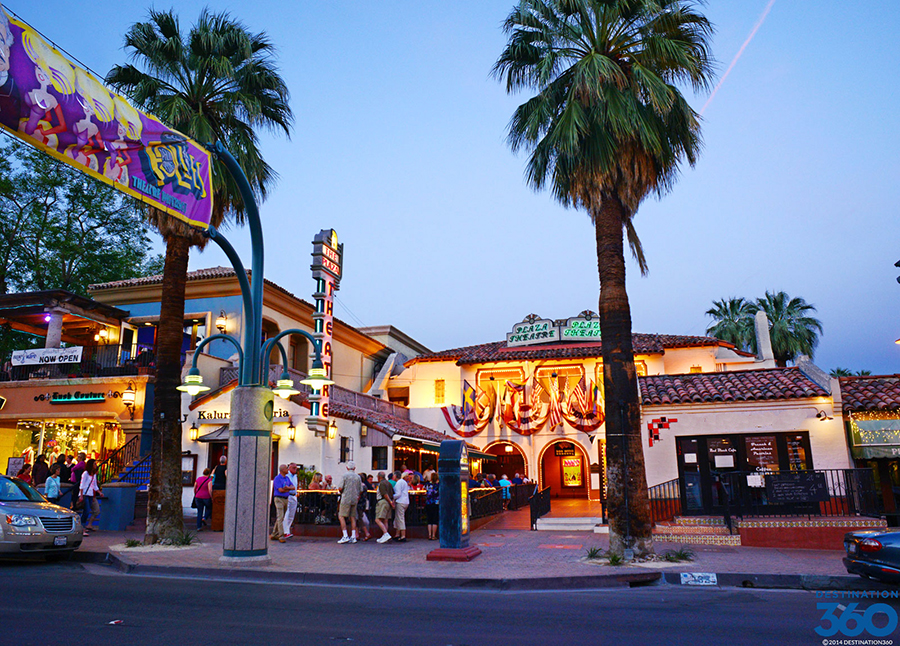 While the theatre’s Mediterranean-style architecture is a far cry from mid-century, “it holds a special place in Palm Springs history,” says J.R. He’s on a mission to return the theatre to its original glory.

The Palm Springs Plaza Theatre story begins in true Hollywood style. Built in 1936 by heiress Julia Carnell, who loved Palm Springs but thought there wasn’t enough to do. She solved the problem by buying some land and building La Plaza movie and shopping complex. In a precursor to modernism, Carnell commissioned architect Harry Williams to design the buildings. His son, E. Steward Williams, became one of the giants of Palm Springs modernist architecture. Hollywood loved the Palm Springs Plaza Theatre. In 1936, it hosted the world premiere of Camille, starring Greta Garbo, and continued with film screenings, live radio shows from Amos and Andy to Frank Sinatra and other entertainment. In 1991, the theatre became a Class 1 Historic Site.

J.R. is looking to give it a Hollywood re-birth. “History and architecture is what makes Palm Springs unique and attracts people from all over the world. We need to make sure we’re polishing and preserving our brand,” he believes.

What Will it Take?

Some $10 to $12 million raised within the next two years, he estimates. This will “preserve and keep the theatre alive with top notch entertainment so that it will work on its own.”

J.R. is quickly making progress. Following the success of the February 16, 2020 fund-raiser at the theatre starring Nancy Sinatra, who is an avid theatre supporter, life-long part-time Palm Springs resident and personal friend of J.R., and a $100,000 donation from Modernism Week 2020 — more than $500,000 has been raised in four months, according to J.R.

J.R. has enlisted other friends including Mary Bono, Ross Matthews and Producer David Lee, creator of the TV hit Frasier, who is already a Founder. “Only 150 Founder positions are available,” says J.R. Future donation plans include continuing fund-raisers and individual giving opportunities such as names honored on theatre seats and bricks in the courtyard. “We welcome support from everywhere – Hollywood, New York” – everyone who loves Palm Springs, history and the arts.

Once the capital is in, J.R. estimates a year for restoration. Then Hooray!  The Palm Springs Plaza Theatre will shine like before. Providing the city with top-notch entertainment and a community resource for educational programs and more. Since the theatre is city owned, it can welcome small theatre and cabaret companies that otherwise couldn’t afford such a grand space.

“Palm Springs has a history of artists including actors and architects of the day. By restoring the Plaza Theatre, Palm Springs can honor its past and offer new cultural opportunities for the arts for a new generation,” J.R. enthuses.

Architectural Resources Group has completed a number of theater and other historic projects of similar scope including New Mission Theater in San Francisco and The Alameda Theater. The firm has an Architectural Conservator on board who will be instrumental in the restoration of the Plaza Theatre.

Regarding the status of the fundraising campaign, Foundation President J.R. Roberts said: “Our board formed in earnest last year in response to a $5 million challenge grant from David Lee to support the restoration effort. David has worked extensively in television comedy, writing, and producing Cheers and The Jeffersons, and writing, directing, and co-creating Wings and Frasier. Along with other smaller donations, an anonymous donor pledged $2 million. Recently, the foundation board secured an additional $2 million from the City of Palm Springs and $2.5 million from the State of California bringing our total to date to $12 million.” Due to anticipated cost increases, the fundraising goal has been revised to $16 million in order to restore the building to its original splendor and update it to meet the access, technology, and equity needs of today and tomorrow. Any funds in excess of the actual construction costs will be reserved in an endowment fund to help ensure the theatre’s future needs are met. The Foundation’s intent is to raise the remaining $4 million by the end of 2022.

When restored, the Plaza Theatre will be the only place available for the entire community to come together and utilize it as an affordable community venue showcasing diverse programming for all people, local youth organizations, promoting multicultural programming in film, music, live theater, education, comedy, and entertainment for all. It will also support and serve nonprofit organizations like the Palm Springs International Film Festival, ONE-PS, Modernism Week, and many others. The valley needs venues like the Plaza Theatre that are accessible and affordable for everyone.

Save The Palm Springs Plaza Theatre

Frasier Helps Save the Plaza Theatre By Barbara Beckley Who knew? Originally the NBC-TV hit…

Since the 1920’s, visionary modernist architects have designed sleek, modern homes that have embraced the…