Tourists make the best tour guides. An exuberance for discovery spurs them forward, a curiosity for details fuels their soul, and a connection with their surroundings becomes contagious until you’re swept into the flow of an adventure in the making.

Such is the life journey of Evan Trubee, owner of Big Wheel Tours.

Although he has lived in Palm Springs for two and a half decades, Evan’s enthusiasm for exploration is as vibrant as a cactus flower, and it continues to bloom. “I used to come visit out here when I was in high school and I just fell in love with the desert,” declares Trubee. “I said, ‘As soon as I get out of college, I’m gonna go move out there,’ and sure enough, I did!”

The year was 1993 and the landscape was fertile with possibilities, even if it meant juggling two jobs. “There was a company called Adventure Bike Tours years ago out here,” Trubee recounts. “It was something to do during the day when I waited tables at night. I started working for them as a tour guide, enjoyed the heck out of it, loved the climate, loved the desert, loved the area, loved working with the tourists and everything!”

Side note: the frequent exclamation points peppering this article aren’t merely editorial flourishes; they are an accurate depiction of Evan’s boundless dedication to his craft. He has translated this vigor into his very own business, but like every great expedition, it began with a few small steps.  Or pedals, as the case may be.

Doing What I Love

“So, I started out with bicycles, of course, because that’s just what I love. It was my passion; I was cycling anyway. But then I started hiring.” Trubee sought a staff that would reflect his own adventurous qualities and amplify them to the paying public. “If we had a large group, we would put guides on the buses who had a natural science background, could talk about plants, animals, geology. So that kind of expanded the scope of what I was able to offer.”

Stepping back with a note of reflection, Trubee recalls, “And I said, ‘Well, geez – we’ve already got a decent reputation, concierges and other people are already using us for these outdoor tours anyway, so why not utilize that resource and put the guides into Jeeps and start booking Jeep tours?’ And luckily it worked.”

“We’re unique, for sure,” assesses Trubee, who brazenly challenges the larger operations in the area. “We’ve got three Jeeps and two SUVs, so smaller capacity, but I like to think we’re on par in terms of quality.”

Trubee’s approach melds a personal touch with a professional discipline, and his positivity is inescapable.

“Sometimes we go out on tour and people are still on their cell phones when we’re in the service [area]. But at a certain point on our tours, you get out of the cell phone coverage, so you have to get your eyes up and be aware of your surroundings and soak in the natural beauty. So it definitely forces you to do that.”

When Evan Trubee describes his love of landscape, it plays like a symphony that echoes through the canyons and forms a majestic harmony with the earth, air, and fiery beauty of the Inland Empire. “It is unique and rugged. The wide-open vistas, the incredible towering mountains, the fact that you’re in a transition between Colorado and Sonora desert.”

Reaching a fever pitch, Trubee exclaims, “Incredible climate! The weather is incredible, blue skies most every day. You kind of forget, when you live out here all winter, how awful it is in the rest of the country during the winter.”

A transplant from New Jersey, Trubee repeatedly expresses his appreciation for the endless summers of Palm Springs. “My first couple of years out here, it was so much fun to not have to deal with winter.” Summoning all the warmth of Riverside County, Trubee continues, “It’s exotic. When you grow up back east, it’s hard to believe that this is still the United States. I mean, it’s so exotic and arid and otherworldly.” 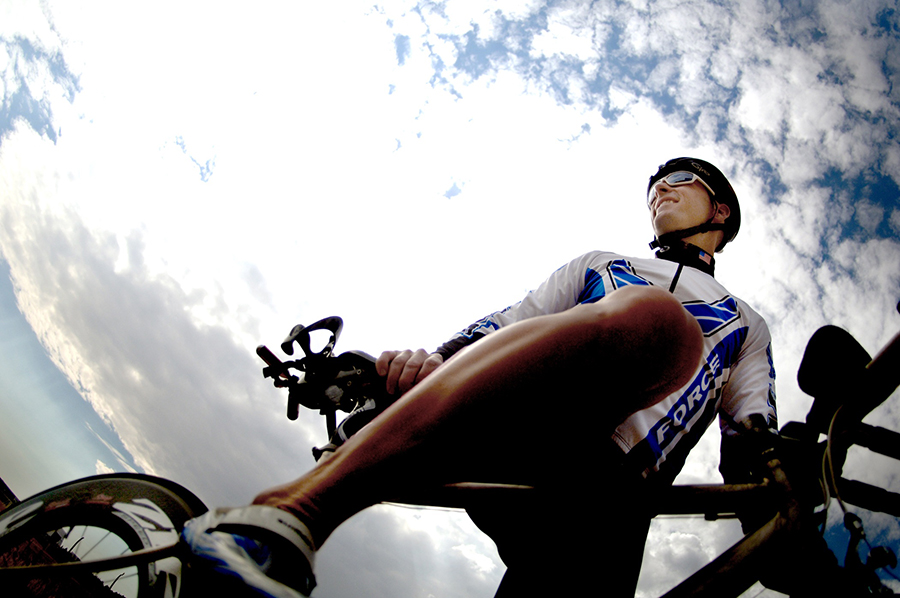 No wonder he was eager to raise a family in this sprawling utopia, but times have changed since Evan was a youngster. “With my own kids, for example, they don’t get out and play as much as I did growing up. I think that’s just a part of our culture.” But Trubee aims to recapture his youth through the work of Big Wheel Tours. “So this is a chance for people to get out and play in the open desert. We take you out to real wilderness areas in Joshua Tree National Park and the San Andreas Fault, and then on the bike yours of course you’re exercising too. So it is kinda like bringing out the kid in ya.”

One of Trubee’s most valuable discoveries among the rocks and ravines of our hometown: serenity. “There’s just something about the setting that keeps people relaxed; that forces you, almost, to be relaxed. It’s hard to get stressed out when you live here…” Trubee pauses for effect before extending his hospitality to the world at large, finally adding, “…or visit!”

You took the words right out of our mouths, Evan. So, please be sure to request Big Wheel Tours as your gleeful guide.

A Cultural Oasis in the Desert

Palm Springs is a vibrant oasis in the California desert. It’s known for its…