Adventure-seekers fear not: A remarkable journey awaits. And one that’s downright informative, too.

Thanks to Desert Adventures Red Jeep Tours & Events, I learned more about the remarkable Coachella Valley than a Google search ever could tell me. Frankly, the latter lacks zest and intrigue, so take note of how many memorable excursions you can experience on the company’s website, but place one at the top of your list first: the San Andreas Fault Nightwatch Stargazing Jeep Tour. It rocked my world. (Sorry, had to go there.) It will do the same for you.

Here’s the thing: Coachella Valley is actually a big basin that sits atop of a few fault lines above a significant underground bed of water. This is mystical land surrounded by rugged mountains; a place once revered by the resilient Cahuilla Indians. Unforgettable? Yes. Enchanting? That’s a given. Let’s face it: We’ve never heard anybody complain that there is a shortage of things to see or do here.

That said, the tour surpassed expectations. It proved to me that there’s always something new to discover in this unforgettable oasis. Six attendees, myself included, were able to absorb both the significance of the geographic positioning of the region as well as marvel at a bevy of eye candy we never would have found on our own.

Led by an avuncular tour/naturist guide, Tom Menig (or Rolling Thunder to those who know him well), the memorable 4WD tour took us deep into the heart of an 800-plus acre preserve right on the San Andreas Fault. As we made our way toward one of our first stops, a breathtaking natural palm oasis—what a haven!—Tom shared some 411: that the San Andreas Fault is one-and-a-half miles wide and, contrary to popular belief, the western stretches of California won’t fall off into the ocean should the Big One occur. Actually, he pointed out that the tectonic plates here rub side to side, forcing the mountains you see around us to continue growing annually. As we ventured deeper into the palm oasis, we learned a great deal about the fault gouge in which the haven rests—fault gouges are remarkable in that these hill-like formations are actually crushed and ground-up rock produced by friction between the two sides when a fault moves. 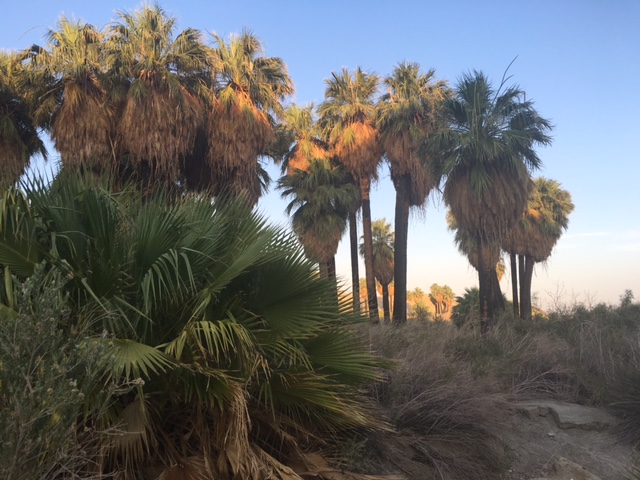 Tom proceeded to lead the group on a brief walking tour through the oasis. He noted several historical facts about the Indians, the animals found in the region, the flow of water into the oasis, and much more, however what truly stood out for me was how peaceful, quiet, and surreal the habitat was. And the palms were a sight to behold.
Back in the jeep, Tom drove us into another secluded area. Here, we were all quite stunned by the breathtaking scenery as the Jeep winded its way along the dirt roads through box and slot canyons that evoked an other-worldly mystique. Hollywood film crews could shoot sci-fi films here and it would look positively realistic. One thing that truly stood out was Tom’s breadth of knowledge. It’s one thing to take people deep into uncharted territory; quite another to do that in a way that allows them to absorb the information being offered. In this case, humorously. Everything from ancient fossil beds to how the canyons were formed was addressed.

The best part? Tom parked the jeep and led us through the crevices of provocative and mysterious rock formations—great for photo ops and unforgettable on the eyes and soul.

This was about two hours into the journey. We were loaded with plenty of historical information at this point—everything from how the Indians relished Honey Mesquite Beans (they taste like Honey Nut Cheerio’s) and Desert Holly to how the Sonora Desert is one of the hottest, driest in Northern America, among other notables. Having had the rare opportunity to experience the land by foot, we moved on.

The sun had set. The sky grew dim.

We parked in a striking replica of an Indian village—the company hosts events here, too—where a deeply knowledgeable astronomer had the telescope up and waiting for us. A wonderfully clear evening, he used his laser pen to point out the constellations above and, like Tom, unleashed a litany of fun facts. What was particularly noteworthy about this evening was that Mars, Saturn, and Jupiter were each visible by telescope. Even better, was that we could see several of Jupiter’s moons as well as Saturn’s ethereal rings. I would be remiss if I gave away too many details. This is something to experience and not just read about.

Take note: Water is provided on the tour. Bring visors and appropriate clothing during summer months.

Beat the Summer Heat! Summer is like an overexcited puppy; it just wants to play,…