Frank Sinatra partied here. Marilyn Monroe slept here. In pop culture lore, Jim Morrison jumped into the pool here – from his second-floor balcony. The 16-room property sits at the edge of Palm Springs’ “Movie Colony” neighborhood, where Golden Age film stars like Cary Grant, Jack Benny, Tony Curtis and Janet Leigh once owned vacation homes. The neighborhood’s many high walls, thick hedges and a lack of sidewalks are reminders of how the stars valued their privacy.

Movie Colony Hotel is located in Palm Springs’ vibrant Uptown Design District, where visitors can find some of the city’s trendiest restaurants, art galleries, shops and more – all within walking distance.

Movie Colony Hotel is also famous as the first hotel designed by master architect Albert Frey in 1935 with John Porter Clark. Born in Switzerland in 1903, Frey was only 26 when Le Corbusier put him to work on the mythic Villa Savoye. He settled permanently in Palm Springs, a sleepy and rather different place in the ’30s, and over the next six decades designed countless buildings, notably the city hall of 1952, the Tramway valley station of 1949 (altered in 1963) and the Tramway gas station of 1965, now the Palm Springs Visitor Center that commands the entrance to the city. In 1932 Clark established an office in Palm Springs and designed a number of buildings in the desert. Clark met Albert Frey when he came to Palm Springs to design the Kocher/Samson building and joined with him to design several projects including the San Jacinto Hotel. 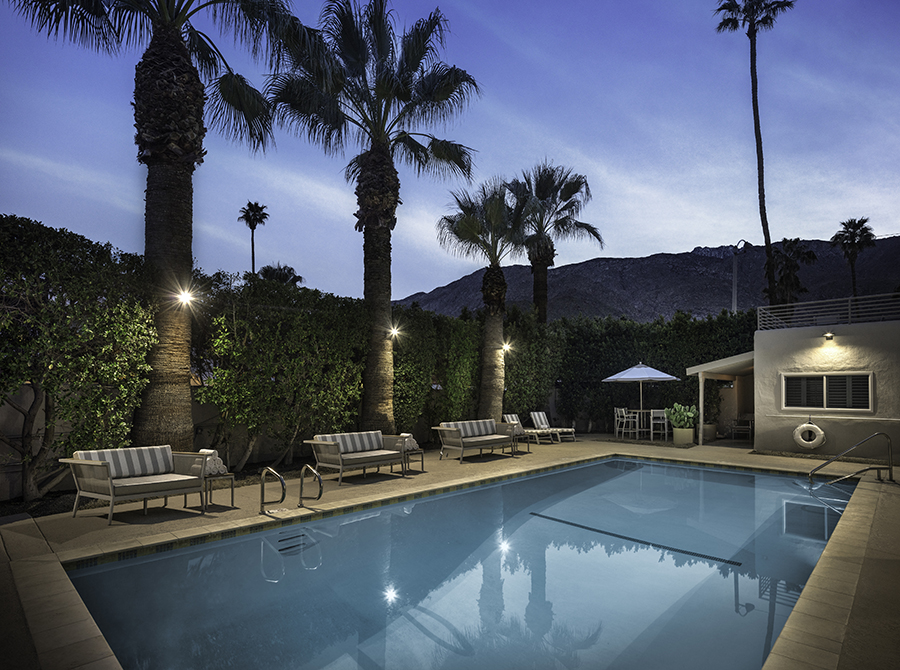 It was originally build as a three-unit townhouse complex known as the San Jacinto Hotel. While most of California was building Spanish Colonial, Frey design a streamlined form and outdoor living rooms upstairs, his tribute to the International Style and to all the promise of California. A decade later Frey was asked to add more apartments to the complex. For the devotees of architecture who flock to Palm Springs each year for Modernism Week, it’s an important touchstone. In the recent renovation the property, the mid-century modern integrity of the Movie Colony Hotel was retained. Frey’s original two-story “townhouses” have been recast into duplex suites.

Warm woods, splashes of color and comfortable sofas and chairs have been added throughout the public and guest areas. The sun-drenched pool area, with a fantastic view of the breathtaking San Jacinto mountains, has been enlivened by bright textile accents in yellow and white. Most rooms have patios or balconies. A central courtyard, where a complimentary continental breakfast bar of bagels, fresh seasonal fruit, juices and French-pressed coffee is served daily.  A patio bar opens each evening. Restaurant, bar and room services from its sister property, the Triada Palm Springs, which is next door.