Experience Tim Burton’s early classics on the largest screen in the Coachella Valley at the Historic Camelot Theatre.
October 27 – THE NIGHTMARE BEFORE CHRISTMAS (1993)
The Nightmare Before Christmas is a stop-motion animated musical dark fantasy film directed by Henry Selick and produced and conceived by Tim Burton.Tired of scaring humans every October 31 with the same old bag of tricks, Jack Skellington, the spindly king of Halloween Town, kidnaps Santa Claus and plans to deliver shrunken heads and other ghoulish gifts to children on Christmas morning. But as Christmas approaches, Jack’s rag-doll girlfriend, Sally, tries to foil his misguided plans. 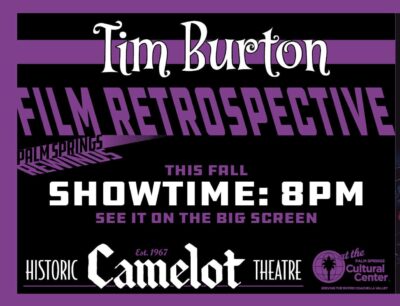