Hosted By:
Tiffany Moon
-The Real Housewives of Dallas on BRAVO TV

Jiaoying Summers:
One of the hottest up-and-coming Asian American females on the comedy scene.

She is one of the most followed Stand Up Comedian on TikTok with more than 1 million followers. 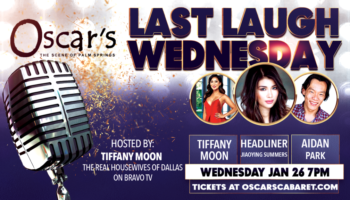