If you can’t remember a time when Frankie Avalon wasn’t a part of your life, you aren’t alone. This talented performer can look back on a career that spans three generations of music, television and motion pictures which he feels is due primarily to the loyalty and trust of his audience.

Frankie’s years as a “Teenage Idol” have been succeeded by maturity and professionalism. He is currently one of the busiest nightclub performers in the country, playing the nations finest supper clubs and headlining top Las Vegas Hotel Main rooms. His motion picture career has already spanned some thirty films. Frankie loves making movies, but his soul is fed by live audiences. He’s excited to come share stories and answer questions about his career.

James Darren has enjoyed a successful, multi-faceted career, spanning six decades of motion picture, television, recording and live concert performances. With a notable career in films (Gidget, The Guns of Navarone) as well as television (The Time Tunnel, T.J. Hooker, Star Trek: Deep Space Nine), Darren has re-emerged on the movie scene with his first co-starring role in a motion picture in 40 years in “Lucky.” He’s very excited to share the stage with his good friend Frankie this spring at Oscar’s in downtown Palm Springs. 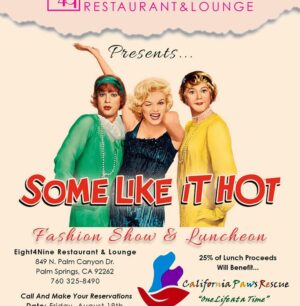 Come in from the heat and enjoy a cool lunch at 849 restaurant. Donations go…